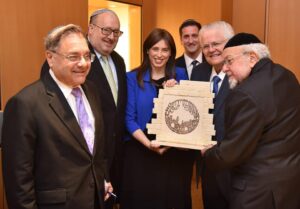 On Sunday, Israel’s Ministry of Foreign Affairs, in partnership with the Center for Jewish-Christian Understanding and Cooperation of Ohr Torah Stone, paid tribute to an outstanding individual who changed the modern-day landscape of Jewish-Christian relations – Rabbi Aryeh Scheinberg. The rabbi is known within Orthodox Jewish circles as one who turned around a dying synagogue in the mid-1970s and transformed it into a vibrant Jewish community. What is less know about him is that he is the rabbi of one of the most influential pastors in the United States, John and Diana Hagee.

The incident that brought the rabbi and pastor together was Operation Babylon, when Israel took out the Iraqi nuclear reactor in June of 1981. The world’s reaction to Israel’s unilateral decision, including the United States, was a full condemnation. Sensing Israel’s lonely position on the political stage and called by God to do something in support for Israel, Pastor John Hagee wanted to conduct a Night to Honor Israel. However, he wanted the support of the Jewish community.

With fears of an Evangelical agenda of proselytization on their minds, the Jewish leadership was prepared to say “thanks, but no thanks” to the Hagees. It was Scheinberg who went to bat for the Hagees, forcefully arguing that the Jewish community had to give them a chance. “Maybe they are friends,” Scheinberg famously said. The Night to Honor Israel went forward and has now been repeated every year in San Antonio and has been copied at churches across America. The rabbi’s “yes” not only led to annual Night to Honor Israel by Cornerstone Church and raising over $100 million for Israeli and Jewish causes, but it provided the motivation for Pastor John and Diana Hagee to establish a mass movement of Christian Zionists known as Christians United for Israel in 2005. Today, CUFI has more than 4.5 million members across the United States and is the largest pro-Israel organization in America, maybe in the world. It is no exaggeration to say that the US administration as well as the members of both houses of congress do not vote on anything relating to Israel without hearing from CUFI’s leadership and members. CUFI’s influence on American policy is so impactful that Prime Minister Netanyahu has referred to this organization as a “critical component of our national security.”

At the ceremony honoring Scheinberg, Deputy Foreign Minister Tzipy Hotovely openly credited CUFI lobbying for the historic move of the US Embassy to Jerusalem. When it comes to US policy on Israel, CUFI is a force that should not be underestimated. Hotovely acknowledged Scheinberg’s pivotal role in the founding of CUFI and also credited him for its growth and ongoing operation. Simply put, without Scheinberg’s courage and vision there would be no mass movement of Christian political support for Israel as there currently is.

While some may see it as ironic that the steward of Christian Zionism should be an Orthodox rabbi, we believe that this perspective misses a central point around which the relationship revolves. What follows from this is the very core of the Orthodox Jewish-Evangelical Christian relationship; that the State of Israel represents the Biblically foretold and long-awaited return to Zion of the people of Israel; that the current economy and population of Israel, which is “more numerous and more prosperous than it’s ancestors” (Deuteronomy 30) is a direct fulfillment of God’s promises made to the Jewish people Israel over 3,300 years ago. The Orthodox-Evangelical relationship is natural and Biblical.

Some 37 years and 4.5 million participants later, Scheinberg’s vision has prevailed. All of us who work in the sacred space of Jewish-Christian relations owe a supreme debt of honor and gratitude to him. Rabbi Aryeh Scheinberg, thank you.

The Op-Ed was originally published in The Jerusalem Post