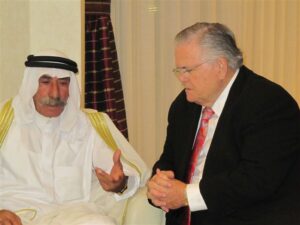 At the initiative of Rabbi Shlomo Riskin, a meeting was arranged last month in Jerusalem between Sheikh Abu-Khader Ja’abari of Hebron and Pastor John Hagee, Founder of the Cornerstone Church in San Antonio and of Christians United for Israel. The three clergymen spoke for two hours about the need to reject violence and develop greater tolerance between religious communities. “It is critical that the clergy of the three major religions of the world – Judaism, Christianity and Islam declare together their united belief in a God of love, morality and compassion,” Riskin remarked. Hagee added, “This conversation was illuminating and in many ways inspired my hopes for peace and I pray that is only the first of many such meetings.”

Bringing together Hagee and Ja’abari was a coordinated effort between Riskin’s Center for Jewish-Christian Understanding and Cooperation and the Interfaith Encounter Association, led by Yehuda Stolov. Also in attendance of this meeting were Dr. Ashraf Ja’abari and Noam Arnon Spokesman for the Jewish Community of Hebron. “It was truly a moving moment to see these major leaders representing each faith community share their commitment to peace and finding meaningful ways to build trust and hope for a better future in the Holy Land,” Stolov remarked.